A Journey of Life -Gift to Family 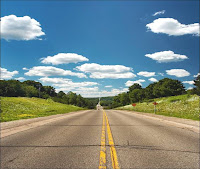 Read recently in the Catholic Times, where a group of grandmothers, without fail, would go daily to a large department store and meet at the tea room on the fifth floor. They would all arrive around 11:00 in the morning as if going to their place of work, eat together , drink their tea and spend the time talking until 4:00 at which time, return to their homes. They would be elegantly dressed and one would think they lived comfortable lives.

They talked about their families, daughter-in- laws, son- in- laws, the grandchildren, their dreams and other sundry topics but this eventually came to an end and the few that continued to show up would just stare intently at each other's face with no laughter or anger, in silence with nothing to say.

You would think that if they had nothing to say they would stop coming, but no they were happy just to stare at each other. The group, according to those that were familiar with the situation, started out with 7 but the numbers decreased until you only had two coming out and they would spend the time gazing at one another. The writer mentioned, in a way it was very sad, but also at the same time beautiful. They were all in their eighties and at that age it was not easy to keep active; it was probably an attempt to forget their pain.

The older one gets, it is a blessing to enjoy the company of others but for good health, it is also necessary to find some way to entertain oneself. She would recommend writing your own life story to leave with the family. It would not be important to have it well written but each page would be unique to you. It would also make the years ahead more significant and a great gift and example to the children.

In the retreats we make, on occasions, we are asked to write a 'life line' of important events that we remember from our earliest years. It would be in chronological order from the earliest memories that we have. For a religious person it is a way to see how we are being led by God. It can help to focus us on where we are now in the journey of life. To write an autobiography sounds intimidating but it would be a 'life line' with a lot of fill in, a great hobby and a wonderful gift to leave the family.
Posted by Catholic American Eyes in Korea at 12:05 AM 6 comments: Links to this post