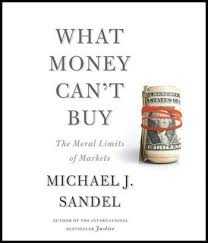 This past spring Michael Sandel, the well-known  professor from Harvard University, was invited to Korea to lecture on the topic: What money can't buy, and it is very little. Writing in the Catholic Times a guest columnist gives us a few of the examples used by the American political philosopher in his courses on Justice for which he is famous.

We are living in a time when almost everything can be bought and sold. The examples the columnist gives are from the US. You can get a residence permit for $500,000, for a few thousand dollars  a surrogate mother, for a certain fee  a cell phone number:  direct contact with your own  specialist; with a money contribution to a college, the opportunity to send your children to the school, with a fee,  access to a carpool during rush hours in a fast lane, and a way of getting a clean jail cell.

On the visit of Pope Benedict to the States,  although the tickets were given out free there were advertisements selling them for $200.00. While on research in the States, he saw advertisements by  Ivy's league students who for a fee were selling semen and eggs, prices would depend on the intelligence and height of the students. There are few things that have not become commodities and ready to be bought and sold.

We hear Jesus say in the Scriptures: "You can't serve both God and Mammon" (Matt 6:24). The Church,  based on the Gospel, works to uphold the dignity we have as children of God and to be united with the poor of our society and to fight against the abuse of the  private profit rational of the market. The Church has to continue speaking loudly as a spokesperson for the poor and the alienated of our society.

Peace comes from the protection of the common good, respect for humanity,  freedom to express ourselves, and the practice of fraternal charity. May the flower of love and justice come.