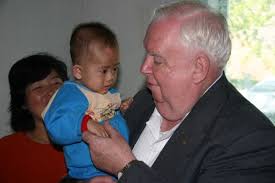 We just returned from another visit to North Korea with the Eugene Bell Foundation. Far from ordinary, this visit was unique in several important ways.

We were in North Korea for three weeks; one week longer than our usual visits. Our delegation was the largest yet  As you can see, this group included two priests from the Guadalupe Missioners, one applicant to the Paris Foreign Missioners as well as Father James Lynch Vicar General and myself from Maryknoll Fathers and Brothers; five priests in all. All were clearly identified as missioners on Eugene Bells application for visas. We received our usual hardy welcome from our North Korean hosts.

During this visit our delegation was able to visit four new multidrug resistant treatment centers, bringing the total number of centers supported by Eugene Bell to twelve. Our work has also expanded geographically (please see the attached map) and now covers the western half of North Korea from Shinuiju City in the north to Kaesong City in the south.

What follows is a brief description of a day at a treatment center.

Our rural centers are located anywhere from two to five hours from the capital city of Pyongyang. Electricity is scarce in the rural areas so we had to make maximum use of daylight, meaning we usually left the hotel before daylight and did not get back until well after dark. Most roads are unpaved. When we arrive at a treatment center (a small village of simple cottages that house patients and staff) our vehicles park in the widest open space we can find. Local staff gather around the vehicles (Maryknoll provided a new bus this year) to help us unload boxes of medication and other supplies. They also set up tables and chairs, and help move the delegation’s portable diagnostic equipment into a nearby building. Our digital X-ray machine (a Catholic donation) is set up outside or under a tent as needed. Portable generators provide electrical power. Boxes of patient nutritional supplement are transported by truck and stacked in the courtyard ready for inventory. Each patient is provided two boxes of nutrition packets every six months and extra is also available for the staff. We count and collect empty nutrition packets at every site.

Patients currently receiving treatment always greet us warmly. Many of their faces are familiar. It is always good to see them but also sad to hear about those who have died since our last visit. The program provides each patient with a box of medication that has their picture on it along with the name of the donor who supplied the funds for their treatment. Our visit reminds them of the people who have sacrificed to provide the expensive medications needed to treat their multidrug resistant tuberculosis. About one third of the program is supported by Catholics. It is both a privilege and a blessing to be able to tell patients how much Catholics care about them.

While we are setting up for our day’s work, a large crowd of people seeking treatment gather around. Many have been sick with tuberculosis for years and have failed several courses of treatment with regular tuberculosis medications.  They and their families know time is running out and there is no place else to turn.

It takes about thirty minutes to get ready. By this time, a team of North Korean doctors and delegation members have set up the four portable diagnostic machines. These are expensive state-of-the-art equipment is capable of diagnosing multidrug resistant tuberculosis in a matter of hours. (three of our four diagnostic machines were provided by Catholic organizations). Documents and records are arranged on one of the tables and a joint team of local caregivers and delegation members are in their assigned places. We are then ready to start processing patients. Patients are registered, weighed, photographed for identification purposes and X-rayed. Those who are being processed for admission are watched carefully as they provide their first sputum samples. I do my best to encourage those who are so weak that they have a difficult time providing a sample for analysis.

Local medical staff line up people from a waiting list, people who have a long history of TB and who they suspect suffer from multidrug resistant tuberculosis. A member of the delegation walks down the line, counting off the number of people who will be allowed to submit sputum samples for testing. This is heartbreaking work. We have to limit new applicants because of limited capacity. As a rule, we are able to admit an average of 30 new patients per center per visit. But sadly, many have to be turned away. Those who do not get a chance to submit a sputum samples for analysis will have to wait six months for another chance…if they live that long.

Testing the sputum samples from new applicants for admission takes at least six hours. Those who are confirmed to be MDR-TB sufferers will be admitted to the program late in the afternoon and given their first box of medication.

As soon as new applicants are processed, patients currently registered in the program provide sputum samples that will be taken to a lab for analysis. Regular monitoring of a patient’s progress is an essential part of the program.

After several hours the diagnostic equipment registers the results of the first batch of tests. It is a sobering time for everyone, particularly the applicants. Which of the applicants will test positive and receive lifesaving medication on this visit? Who will test negative and fail to gain admission to the program? Sometimes someone with a long history of TB test negative because they couldn’t provide a good sputum sample that day. We try to encourage those who ‘fail’ by promising to test them again next visit. It is painful beyond description when this happens.

While the diagnostic machines do their work, our delegation’s medical director consults with local staff, reviewing each patient’s records and charts. Meanwhile other delegation members are organizing a ‘graduation ceremony’ for those who have completed treatment and are ready to go home. Delegation members, particularly priests, are asked to address the ‘graduating patients’, many who have been under treatment for two years at the center.

After the graduation ceremony all registered patients (including newly-accepted patients) receive a box of medication that will be used by the medical staff to treat their disease until our delegation’s return six months later. Then a careful count is made of all medications and supplies provided on that visit. By this time it is usually almost dark. Sometimes we finish by flashlight before boarding our vehicles for a long drive back to the hotel and a very late supper.

As you can imagine, our days are long and hard but rewarding. Treatment outcomes (the percentage of patients who make a full recovery) continue to rise. Thankfully, we have been able to double the size of the program during the last two years. We will have more than a thousand patients in the program by next spring. But sadly, we are able to treat only a small percentage of the multidrug resistant patients in North Korea today. Giving all MDR-TB sufferers a chance to recover would require a much bigger program.

While we have focused primarily on Catholic-sponsored tuberculosis work in North Korea, we have also attempted to provide religious services for the foreign residents in Pyongyang. Gratefully, this work, which was begun four years ago, has also grown markedly during the past two years. During this time (2010-2013) I have be able to offer 9 Masses at the Polish Embassy and one at the Swiss Embassy.

On this visit I was able to say Mass for more than seventy members of Pyongyang’s foreign community on October 27th. This was more than double the number of participants that attended this spring’s Mass in April. Not all participants were willing to sign the attendance sheet but a far greater percentage of attendees (Catholics and non-Catholics) were willing to identify themselves openly than ever before, suggesting a gradual decrease in uneasiness with attending religious services.
Progress in the spiritual nurture of Pyongyang’s foreign residents would not have been possible but for Edward Pietrzyk, the Polish Ambassador to the Democratic People’s Republic of Korea. He has made a special effort to make his embassy available for the Mass on every one of our visits. Ambassador Pietrzyk is retiring in a few months, however, and it is not clear at this time whether this hard-won tradition will continue. Needless to say, this vital effort should continue.