What Is Meant By Success? 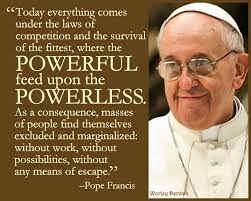 On the spiritual page of the Catholic Times, the priest columnist recalls being invited to a  play directed by a former classmate, and being filled with pride for his success. After the play there were two tables set up where  they all sat and began discussing the evening's event. At the table directly in front of the stage was sitting a good-looking young man who the columnist hadn't noticed as part of the cast. During the conversation, he learned that he was behind the stage, responsible for the lighting.

There were many seated at the tables that had worked behind the scenes, out of sight of the audience. The columnist blamed his own ignorance for not knowing what was happening behind the stage when the actors were on stage. He was surprised to see how many of them, working quietly and unknown to most of the audience, were responsible for producing what was seen on stage.

During the discussion at the table  the man working on the lighting turned to the priest and said: "Father,  I am a farmer from nearby. I work during the day farming, but in  the evenings I come here to take care of the lighting for the performance."  The priest stood up  and gave him a bow. "I have a feeling of pride in hearing you say, so openly, that you are a farmer."

"What is it about a farmer that is so praiseworthy? asked the young man. "it was the way you made known that you were a farmer that impressed me," the priest replied.

The priest then went on to mention that at a nearby high school, close to where he lives, there was a placard with the message: "We are proud to have a special talk from one  of our alumni."  This talk, said the priest, would no doubt give the students  a dream that someday they will also be able to succeed in life as this alumnus had done. But we know it is not only what appears to the eyes of the onlooker that is  praiseworthy. Also praiseworthy are people who, like the young farmer, without fanfare and very quietly, do their work with pride.  If we consider only a person's credentials and position in society, and the honor that comes with the position, something is seriously missing in our value system, the priest said. Referring to the placard  at the alma mater  of the successful graduate, he wondered if this is not just reinforcing the feeling of many that honor is the goal for  success in life.

Unknowingly, we can be fostering, he believes, what we dislike without thought of the result of  our  words and actions  Whatever we do has all kinds of ramifications and, perhaps thankfully, we are not conscious of them most of the time. Because there is just so much that we can handle at any one time, it may be helpful to pray for the strength and courage to do something about our incorrect thinking, when we are ready for that change.

The columnist ends the column by noting that when we find satisfaction and joy in what we do, even if it does not bring us honor in the eyes of world, we are living a praiseworthy life.