An Unlikely Teacher In Accident Prevention 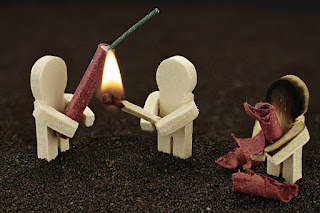 In a Catholic Digest article, a doctor introduces the readers to a  young man who prepared a  firework for America's Independence day some years ago,and lost the use of his right hand. Because he was wearing a corona 19 mask the doctor did not quickly recognize the man. He waved his right hand before the doctor: "You are the one that gave me this crayfish-like hand."

Mr. P was the man who some years before, on July 4th bought some fireworks in the market wanting to show off to his girlfriend. He was not really interested in finding a job and was living a life of leisure, the life of what we would call problem youth.

He took the firework and added more explosive powder making for a powerful firework. This of course was all against the law of the country.

He visualized the happiness on the girlfriend's face when he lit the fuse, unfortunately for him instead of going up to the sky it exploded in his hand. He lost his right hand and his body and face were injured. He had the wrist intact and with this, the doctor was able with the fragments to make a hand with the ability to grasp—thumb and forefinger.

The young man seeing the life ahead as bleak, fell into a deep depression. His girlfriend did return to him a few times but left him which made the depression more severe.

When one has the thumb and forefinger he has 70% of the use of his hand he reminded the young man, trying to give him hope for the future. The young man with a wry smile: "I didn't have a job when I had the use of two hands what kind of work can I find with only one hand?"

The doctor did pray for the young man and for a while he came to mind but soon forgot. Four years later he appeared with a smile on his face and appeared happy. He recounted what had transpired over the years.

For several years he was beset with depression and not able to find any work. He was no longer able to watch firework displays.

In the news, he saw how an elementary school student had injured himself in a firework accident. An idea flashed in his head. If he went to the schools and talked about his experience and showed the students what happened to him would this not reduce the number of accidents?

He went to see the principals of the elementary schools and they were quick to give permission. He talked to the students in the upper grades telling them of the dangers of fireworks and showing them his hand and letting them touch it. He felt like a celebrity in a public performance. News spread from one school to another and was busy as a teacher in preventing accidents.

With two hands he had difficulty finding work  but now is busy talking about what he has learned about safety. He met a nurse in one of his talks and has begun dating, which gave him something to boast about.

He demonstrated to the doctor his ability to pick up sheets of paper. He also grabs the arms of the students and shows the strength that he has. He even showed his strength to the doctor.

The doctor was glad to see the great change in the young man and expressed this in clapping for the new man that he had become.