What Will Happen at the 200th Anniversary? 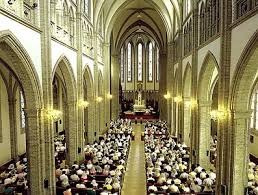 When Korea became a Vicariate Apostolic 180 years ago, it entered officially into the Catholic world. In 20 more years we will be celebrating the 200th year of the the Vicariate that developed into a Church operating autonomously in 1962 with its own dioceses; no longer could Korea by considered a mission country.

Reflecting on the history of the Church in Korea, a retired history professor, interviewed by the Peace Weekly, expressed surprise that not much attention was given to celebrating the 180 years as a Church. We were different from many other countries in Asia, he said, because the French foreign missioners, unlike the Spanish and Portuguese missioners, felt it important to train the Koreans for the priesthood, which  stimulated the growth of the Church.

During the recent past the efforts of the Church in working for justice for everyone strengthened its relationship with society, contributing to its growth and helping the country to transition to a democratic society.

The professor says that the work of the Church in evangelizing the culture has enabled its numerical growth and  maturity. However, he sees a problem developing today: few young people are in the forefront in  efforts to evangelize the culture. Convincing the young to participate more in this endeavor continues to be an important concern of the Church.

Evangelization is best done when the  Christ  we see and have in  our hearts is the Christ with which we want to evangelize the culture. By inculturating the Church into the culture, we integrate justice  and love throughout society, as we devote ourselves to working for the common good, which requires, says the professor, that we work for the reconciliation of our country.

Thirty years ago, at the age of 37, the professor was involved with the preparation of the 150th  anniversary of the formal  beginning of the  Catholic Church of Korea. At that time, he said that the young, the middle-aged and the old people of the Church were involved. He looks forward to that being true on the 200th anniversary.
Posted by Catholic American Eyes in Korea at 12:05 AM