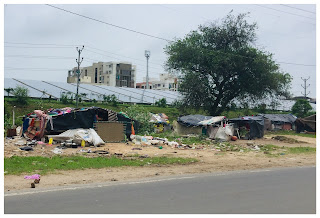 Many Christians are perplexed not knowing the standards to determine what is rich and what is poor. With these words, a Catholic University professor of economics begins his article in the Kyeongyang magazine.

In the Scriptures, wealth is seen at times as good and other times as sinful. This is true also of poverty. Wealth is God's blessing and the Church and society have no problem with the search but at the same time, we are told to imitate Jesus who was poor. They both have their roots in the Scriptures.

Is this then a contradiction in the Scriptures? No! There is no value judgment on either poverty or wealth—rather on the kind of wealth and poverty.  The wealth that comes with sweat and effort is praised that which is not has no value and is sinful.

The poverty that comes from the actions of others or from natural disasters and the structures of society, God is always on the side of those suffering. They are blessed. However the poor because of laziness or from their own fault the Scriptures considers it sinful.

The income from effort is seen with joy on the part of God and the wealth should be used wisely, it's a blessing. Wealth without effort is not seen as a blessing. God sees those who suffer from the results of this unearned income and sees them as blessed.

If one is to have peace of mind with the income from labor it is necessary to have equal rights to the land. We need places to work but if one doesn't have the right to land, insecurity will always follow. If all the citizens had equal rights to the land and speculation on land ceased, the unearned income would disappear, income from effort would be present and vitality would return and places of work would increase.

In the Scriptures when God determined the distribution of the land it was to prevent the possibility of unearned income. The income from effort requires sacrifice, greed has no place.

"They will build houses and inhabit them, plant vineyards, and eat their fruit. They will not build for others to live in or plant so that others can eat. For my people will live as long as trees, and my chosen ones wear out what their hands have made. They will not toil in vain or beget children to their own ruin for they will be a race blessed by Yahweh, and their children with them" Isaiah (65:21-23).

"Woe to those who add house to house and join field to field until everywhere belongs to them and they are the sole inhabitants of the land" Isaiah (5:8}.

The recent scandal associated with the Korea Land and Housing Corp. (LH) purchasing land allegedly based on classified information, has helped drop the president's approval rating and of his partly dramatically.

There is no future for a country where high-ranking officials and policy enforcers seek unearned income, regardless of legality. The behavior of these people will soon be transmitted to the majority of the population.

In this way, a country where the majority of its people cling to unearned income, not hard-earned income, eventually goes under. Doesn't the Bible and human history prove it?