The Life on a Korean Farm 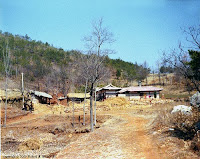 It has been obvious for many years that we in the country are losing many people to the city. I am a resident of a mission station that is on an island. There were more Catholics here 40 years ago than there are today. We have few young people and consequently the difficulty of finding farm workers.

The import of foreign farm goods makes the income of the farmers very unpredictable. The government does subsidize the rice farmers; I can’t imagine what would be the situation if they did not. One of the blessings of this island is no water problems and no natural disasters that have afflicted other areas of the country.

There is the problem with the schools for many choose to send their children to the city for an education. That means that it is not easy to keep the school morale strong.

Since the farmers are getting old they do not seem to have the desire to change the ways of their fathers. They are still working with plastic greenhouses and you find few who want to change to more creative ways of farming and the planting of different crops. There is one man who is coming out to the Church at present who has started planting blueberry plants. He gave us 4 to plant on our Church property and it was something to see. He brought his own peat moss that he imported from Canada and fertilizer. He is one that is trying something new. Hopefully it will work out.

I have not been able to figure out if the farmers are in a profitable business. The money they have to spend on equipment is extremely large. One farmer that I was talking to mentioned that in the beginning he was able to make money by using his equipment on the other farm plots and being remunerated but everybody wants their own equipment. This income has mostly disappeared. He told me the price of some of the equipment, and if true, I do not see how they can make any money farming. I do feel there is something important that I do not know about their life. The price of the land is going up all the time and probably the assets that they have is what keeps them going. Many of them are rich farmers but I wonder if it is the farming that has made them rich. It is fact that the governments of all the countries of the world want to see this life continue. They are willing to subsidize it, for the benefits are just too great to enumerate, even if it is not making a profit.
Posted by Catholic American Eyes in Korea at 1:18 AM No comments: Links to this post