Alcoholism and the Catholic Church of Korea 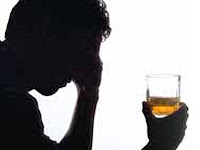 On the Hic and Nunc website there was an interesting poll that was taken at the end of last year and on which they recently commented. It was a survey of 700 people that drank more than a bottle of Soju (cheap Korean liquor) a day. The Catholics registered the highest with 39.3% , those without religion 36.1 % , Buddhists were 25.6% and Protestants was 17.5%.

The reason the Catholics were the highest was the way they see drinking. They are warned against the hedonist life style but no interference in what to eat or drink. In the 2nd chapter of John's Gospel Jesus, after the wine ran out, made another batch for the wedding guests.. We also have St. Paul telling us the problem is not what we eat but our attitude . I would like to add that St.Paul also advised Timothy, to use wine in moderation for health reasons.

The Buddhist monks and nuns are not to drink but it is permissible for the Buddhist faithful to drink in moderation.

The Protestants are the strictest. The first missioners that came to Korea were from the States; they were strict in their teaching on alcohol: no alcohol or cigarette smoking.

There are many in the Church who have a problem with drink. Drinking can be something positive but can also turn into a harmful habit that destroys not only the person who drinks but all who are in some way connected with him or her, especially the family. Fr. Heo runs the Alcohol Pastoral Center in Seoul. A good explanation of his work can be found here.

The "bomb shot," or "poktanju" in Korean, is a favorite among many. A shot glass filled with soju is poured into a larger glass filled with beer. The mix is then consumed in one or two gulps. Those in the world of business have this as one of their occupational hazards. It is part of the world in which they live and it is little wonder that it does havoc to many.

Below are the words of a Columban priest who worked with those addicted in Korea before returning to Australia. This is taken from the blog of the Missionary Society of St. Columban.

12 Steps Come To Korea
In recovery from alcohol addiction, the first step often starts not with the alcoholic, but with family members and friends of the alcoholic. At about this same time, other Columban priests started education centers for alcohol and gambling problems. Twelve-step programs were started because of our concerns.

Two priests who had pioneered 12-step programs in Korea had died, so I was asked to take over an addiction recovery program in Seoul, South Korea's capital city. I had no trouble attracting people who wanted to attend the program at the center; it was the only such place in Korea, and we got calls from all over the country.

I also traveled to hospitals and visited with groups to teach family members and those working with addicts how to make life better. I learned that much damage is done by people with good intentions to help the alcoholic or compulsive gambler who, in fact, prolong or aggravate the problem because of their lack of knowledge or denial.

I have experienced much pain and heartbreak when listening to the stories of addicts over the years. I still get so angry when I come across people who have suffered for many more years than necessary, especially when they got wrong advice from someone like a priest, minister or medical professional.

After my work in Seoul, I moved on to Sydney, Australia, and continued my 12-step program work with both Koreans and those from other nations. As I completed studies in addiction counseling to be better prepared for my work, I was amazed at how often I met those who spoke with authority on the subject but who failed to inform themselves about counseling to become more effective.

Working with Koreans in Sydney has taught me some new things about addiction. Often, the addict had moved to Sydney to avoid temptation or to run from their problems and debts only to find that Sydney has more gambling machines and more clubs and pubs than Korea.

Combine this with the added stress of settling into a new language and culture, and family problems would often be brought to the surface. Children in the family must face alcohol and drug problems in their family.

As a result, a whole family becomes engaged in addictive and co-dependent behavior. The stress and tension often result in family violence and psychiatric illnesses, such as depression, paranoia and other disorders. The family in denial means that no one gets help, and the price is paid in mental and emotional problems.

Posted by Catholic American Eyes in Korea at 1:35 PM 7 comments:

More on "Comfort Women" from the Korea Herald, Friday July 17. This article was sent to me my Fr. Bob Lilly to add to what was said in a previous blog. This broadens the topic to sites of Japan's atrocities in other parts of Asia. The tour group visited "The House of Sharing" as part of the Korea study from July 2nd to 18th. You can view the article by clicking here.
Posted by Catholic American Eyes in Korea at 6:00 AM 1 comment: