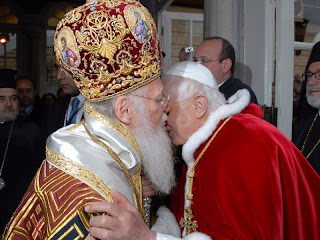 The Catholic Church of Korean has priests stationed in communities all over the world and one of these communities is in Moscow, Russia. This week's Catholic Peace Paper had an interesting article on the difficulties and satisfactions of working in Russian with the Orthodox Church the other lung of the Catholic Church.

A priest from the Seoul Diocese is visiting the parish and will have a three piece report on the visit. The community is using a borrowed building so they have to vacate the Church to allow the other community to have their Mass on Sunday mornings.

The Korean community began in 1994 the services were conducted in English in the apartment of an English Marist Priest. At that time about 20 met together for Mass. When the Marist Priest heard that a Korean priest would arrive it gave him great happiness. From 1994 they have had 3 to 4 priests and finally in 2002 they registered formally as Catholic Church with the government.

The present pastor who arrived in 2000 but returned to Korea after 4 years in Russia returned to the Korean Community last summer. Fr. Kim in 2000 had to go to through the IMF difficulties. Many of the students and other residents, because of finances, returned to Korea leaving only 20 Catholics. He had no telephone and had to live in an unheated rectory. When the recovery came the Catholics started returning to the Church. They have now about 200 Catholics coming to Mass on Sunday and a mission station in Saint Petersburg which takes 7 hours by train to administer every third week .

Father prays that the students studying in Russia do not get sick and those in business do well. He feels that being in Russian is a way we can show the oneness of Catholicism and to work for unity with the Russian Orthodox Church.

Korean Priests have been working in Russian from 1991. One of our Maryknollers who worked in Korea Fr. Benedict Zweber followed them and built the Church in Sakhalin Island. The Korean priests had some visa problems and had to discontinue the work in that part of Russian and the Maryknoll Fathers with the lack of personnel had to leave Russia.

From the recent news reports it seems that a meeting of the pope and the patriarch of the Orthodox Church in Russia may be close. Whether this will overcome the centuries of hatred surrounding the two churches will be answered in the future. Fr. Kim's desire to see the two churches come closer is a desire that all Catholics have.
Posted by Catholic American Eyes in Korea at 4:24 AM No comments: Links to this post