Schooling for the Returnees to the Farm 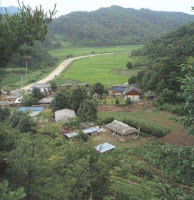 Years ago while working in the country, a family moved into the parish- a college graduate who came to live on a farm. It was a strange sight for many were moving to the city to find work and here was a college educated person who wanted to live and work on a farm. He was different in many ways, very creative and surprising many of us in the way he wanted to live.

The Peace Weekly had an article on the 4th farmer's school in which 36 received certificates of graduation. The program covered:

1) The value of living close to the earth.
2) Our farms, the situation of farm life, and returning to the farms.
3) Eating in the country, and taking care of health.
4) Listening to lectures on different facets of farm life.

The farmer's school is sponsored by 'Save the Farm Program' of the Seoul Diocese. It is an attempt to show the value of farm life. One of the leaders of the movement who is also a poet said: "We who are Catholic at least should not indiscriminately handle food or throw food away, it is dealing with life and it is like treating God in that fashion who has given us life."

The program is to show that we have come from the earth and will return to the earth: giving us a new appreciation of the earth, soil, water and air, and the totality of God's creation. There have been 142 graduates and some have already returned to the country.

The farmers in Korea have always had the respect of the populace. They were important members of society and up until the industrialization composed about two-thirds of the population.

Korean farms are very small in comparison to other countries and with the imports it is difficult for them to make a living without the government subsidies. Most are in debt and have low morale because of what they hear of the future, many have opted for the city.

The farms will be left for those who want to leave the competitive life style of city life. It will probably be people who have lived in the city and after retirement want to return to the country. In this small island I have heard it said that over half the land is owned by those who do not live on the island. The city dwellers have bought much of the land and in the future many will return to live the gentleman farmers' life.

In Korea we have people who have what they call weekend farms. They rent a piece of property and over the weekend come with the family to farm it. They see the beauty of living close to the land; this taste for beauty and God's creation will take hold of many who in the later years will return to the country, be content with the little income, but good working conditions.

The movement towards organic farming is growing strong. It is non-polluting, good for health and preparing for the future. The government is there to help. Daewoo, a Korean conglomerate tried to lease half the arable land in Madagascar but it was cancelled by the new government. This is another sign that it will only be the big players who will win in this 'one world'. It will be those who don't accept this way of thinking that will be attracted to the small farms in the years to come.
Posted by Catholic American Eyes in Korea at 4:11 AM No comments: Links to this post