Confession No Longer Seen As a Holy Gift--Sacrament 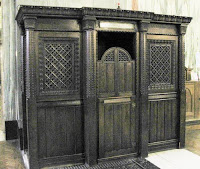 Most surveys of those who have left the Church in Korea show that Confession (the Sacrament of Reconciiation) has been their biggest stumbling block. A detailed study made by  Catholic Peace Broadcasting, the Peace Weekly and the Future Research Institute confirmed the survey results: The requirement to go to  Confession is seen as a burden to many Catholics.

Personal obstacles such as work, school, and doubts about the Church would be the reasons often cited in most surveys.  But when we look at the obstacles that stem from the organization of  Catholicism itself,  Confession would be cited as the most important reason for leaving the Church, followed by meaningless liturgies, being hurt by members of the community, too many financial burdens,  poor sermons, the Church having little influence in society, and the bad example of clergy.

Two similar surveys in Seoul and Suwon had the same results. Combining personal and Church-related reasons for leaving the Church, most indicated that being too busy was the most important reason, next in importance was Confession. In another survey, when asked what can the Church do to facilitate their return, answered: make Confession less of a burden

In Korea if you go three years without confession you would be considered tepid statistically. In many parishes, twice a year a ticket is given to Catholics and returned when they have gone to confession, placing it in a basket in the confessional.  According to Church teaching, frequent confessions are recommended but there is no obligation to go to confession if one is not in serious sin. This is a teaching that is not well understood, but it is part of our Catholic tradition and Church law (Code of Canon Law #989).


Although Confession, being the Sacrament of Reconciliation, should be a consolation and settling of accounts, we have learned mostly from the survey results that many of our Catholics consider it a great burden. The Catholic Weekly, in a recent article on this subject, mentions that many who  are not in the state of grace  and  not prepared to go to confession stay away from Church.   Furthermore, many who are in the habit of sin find that going to confession is meaningless, so they also stop going to Mass; they do not feel they can break the habit of sin. The article mentions that the teaching on Confession has not always been good, nor have our Catholics understood it correctly.

Can the Church make it easier to go to Confession? Some attempts have been made to lessen the burden.  However, the difficulties of  going to Confession are also a blessing for those who can overcome the difficulties; they may come from an incomplete understanding of sin and the difference between confessions of devotion and of obligation. With more clarity on the essential nature of Confession, what is now seen as a burden might be seen as an opportunity for self-renewal, a second baptism.
Posted by Catholic American Eyes in Korea at 12:05 AM