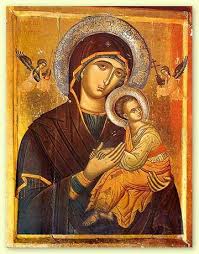 In a recent secular  newspaper column, a writer brings up a long-standing debate between the more conservative Protestants and Catholics. He focuses on the central issue of the debate by summing up a commonly repeated charge: "It's obvious the way many Korean Catholics behave before the statue of Mary that they believe in Mary. They pray to her. Isn't that idolatry?"

Catholics usually respond, he writes, by saying it's a way of showing respect for Mary, and Protestants  respond by asking: does respect require praying to her? That has to be idolatry. He points out that this question of idolatry is not limited to Christianity. A Buddhist temple in China, called the Holy Mother temple, is dedicated to the mother of a famous enlightened Chinese sage. And her statue is in the temple, not the statue of the Chinese sage. Many who visit the temple are surprised to see a statue of a woman instead of the Buddha statue. Building a temple for the mother of a sage also seems unreasonable to many--isn't this going too far, they ask. These and similar expressions are the responses of many who visit the temple.

Many Christians also object to using the term Holy Mother when speaking of the mother of Jesus. The same objections heard when discussing the mother of the Chinese sage. What is the issue being debated,the columnist wants to know? Are we arguing about statues, about the naming of a temple, or are we arguing about an echo that is much deeper? What is  the true character of the echo?

In the Scriptures God does not have form. What does that mean? We cannot  meet God by  human constructs.So how do we meet God?  How do we go to the place that Jesus came from, where he went and where he is now?

That God does not have a form  is where we find the answer. We have to get rid of  all the forms. It is not only what we see with the eyes that are forms  but  my cravings and attachments, etc. all that takes hold of my mind. Whether the statue of the Holy Mother is an idol or not will depend on how much these forms have taken hold of us?

When we look at the cross from top to bottom from side to side it does not stop where the wood stops but goes on to infinity. When we do not try to grab hold  of the form  of the cross,it goes on to infinity and becomes the Alpha and Omega. The beginning and the end become one.The writer concludes: from the cross he meditates on the the word "Holy Mother" in whom the root of life is contained.

To have a writer in a Korean daily newspaper  take on the issue of devotion to Mary by Catholics was interesting. How well he succeeded is certainly in doubt, but that he would attempt such a feat by using philosophical language was  courageous.
Posted by Catholic American Eyes in Korea at 12:05 AM