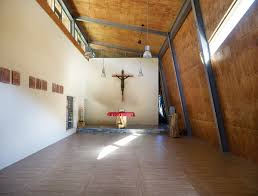 The Catholic Church of Korea has over 1,000 mission stations: small communities of Catholics who do not have a resident priest.  Stations are part of a parish whose pastor  is responsible for their  pastoral needs and makes periodic visits to the station. Distance is the reason for the designation, the site often developing into a future  parish.

Those who represent the pastor in these stations are volunteers who take care of the spiritual needs of the community, and  conduct the mission station Liturgy of the Word on  Sunday. Mission stations  often have permission to have the Eucharist and in the absence of the priest the community leader would give  communion.

This past week the Peace Weekly had a  front page article profiling a catechist, a lay missioner, who was sent to one of these mission stations by the pastor to instruct the community. The mission station was over 40 years old but never had over ten attending the  Sunday service. The reception was anything but welcoming. Not a person said they were happy to have him there and the head of the community himself was cold to him on their first meeting. It was very difficult to accept, and although he thought of going home, the effort of becoming a lay missioner, his dream of many years, was not easily given up.

After arriving at his first assignment and receiving a very cold reception, he rented a room in the town and told the Christians that he would be saying prayers in the church each morning at 5:00 am. Not one person came until  40 days later someone  appeared at the door of the Church and said he wanted to join. The lay missioner's joy was hard to describe.  All seemed to change from then on.  7 or 8  came every day for morning prayers.  Gradually,  the atmosphere in the mission station changed. On the anniversary of his arrival the community had a placard placed out in front of the mission station acknowledging the anniversary and celebrated the occasion with the missioner by preparing a banquet.  The community had grown to over 70 attending Sunday Mass. Not once did he ever ask anyone to come out to the church.

He finds this life very satisfying.  In the future there will be a greater need for these lay missioners as the church continues to grow.  Many of the mission stations need stimulation from the outside which is the work of these lay missioners. The Church in Korea has had few paid lay missioners in the ranks alongside the priests, brothers and sisters, so to have a whole new group coming into the front lines as lay catechists and  missioners will take some time for our Catholics to appreciate. The programs of study for lay Catholics have been around for many years but finding suitable full time positions for lay people within the Church is not always an easy task.
Posted by Catholic American Eyes in Korea at 12:05 AM