A Bribe or A Gift? 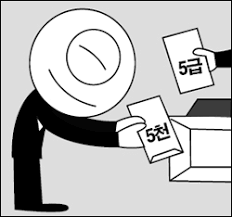 The  giving and taking of bribes is a common practice in all countries of the world, and Korea is no exception. The daily news brings it to our attention much too often.  While the difference between a gift and a bribe is not always easily made, some contend that, whether they are  gifts or bribes, the practice has helped to lubricate our business society and helped to develop the country.

Korean society is very quick to appreciate favors and to return thanks in a material way. What is a gift and what is a bribe may be known only by the one who  gives and the one who receives. And it may not at the time be clear even to them. Gifts, in contrast to bribes, are most often given for favors received, for good work, as a gesture of congratulations or condolences, and, sometimes, simply for the joy of giving.

One of the columns in the Peace Weekly mentions the number one reason for dismissal from government service as the receiving of bribes. When does a gift become a bribe? It is now being discussed in the political arena in Korea. How much can one receive as a political gift without it being a bribe?

This is not only a problem in today's world but goes way back into history. The column mentions an incident in Egypt, 1500 years BC, where someone was reprimanded for giving a bribe to obtain a dishonest decision in law. And in ancient China a noble person did not accept bribes.

Usually, one who receives a bribe will consider it a gift so it can be accepted with a clear conscience. However, a gift is just that, a giving that expects nothing in return, while a bribe is giving in order to receive. The Bible has many entries in which bribes are castigated: "Never take a bribe, for a bribe blinds even the most clear-sighted and twists the words even of the just" (Ex, 23:8).  It compares bribes to black magic: "A man who has a bribe to offer rates it as a magic stone" (Proverbs 17-8).

The column gives other quotes from Scripture that show the evil of bribes but comments that in all the quotes it never refers to the giver of bribes but always to the receiver. This is conjectured to be because the one who gives is weak and the one who receives is strong and influential. At the time of the Scriptures those who received bribes where those who  could give some advantage to a person, and  also had a say over matters of life and death.  "There are those of you who take bribes to shed blood. You exact interest and usury. You despoil your neighbors violently; and me, you have forgotten, says the Lord God" (Ezekiel 22:12).

To receive a gift is always pleasant and can't help but dispose one to see the person giving the gift with benevolence. This is the danger even in receiving a gift which is truly a gift. You want  to return the favor, and this is where the problem comes in. If the gift changes the way we treat  others who have not given us gifts, then that gift works like a bribe, and our actions are unjust.  It is a serious problem.
Posted by Catholic American Eyes in Korea at 12:05 AM