Have I Selected the Better Portion? 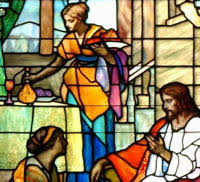 Age quod Agis, Latin for "Do what you are doing," is a phrase we heard repeatedly in seminary. A similar idea, with variations, that might be heard in most cultures of the world would be: "If it's worth doing, it's worth doing well." The columnist writing on spiritual matters in the Catholic Times, without using the phrase, gives us a worthwhile  lesson on how to apply this advice in our daily lives by referring to the story of Mary and Martha from the scriptures.

A priest friend who came to visit had an interesting take on the story. He had studied scripture in Europe and asked his friend what he thought of the story in Luke.  [Chapter 10:38-41, "On their journey Jesus entered a village where a woman named Martha welcomed him to her home. She had a sister named Mary, who seated herself at the Lord's feet and listened to his words. Martha, who was busy with all the details of hospitality, came to him and said, 'Lord, are you not concerned that my sister has left me to do the household tasks all alone? Tell her to help me.' The Lord in reply said to her: 'Martha, Martha, you are anxious and upset about many things; one thing only is required. Mary has chosen the better portion, and she shall not be deprived of it.'"]

Without giving it much thought he told his friend that Jesus was telling Martha, and all of us, that prayer and meditation are important.

The friend, laughing, said, "Every time I  come across this passage I reflect on my life and  wonder if I, like Mary, have  selected the 'better portion.'  The story can be understood," he believed," as contrasting Mary, who was right, and  Martha, who was wrong. However, it is important to remember," he went on, " Jesus did not say  Mary was right and Martha was  wrong. All that  Jesus said was Mary, at that particular moment, had selected the 'better portion'."

"Brother, if we bring the scene to mind we see that Jesus was in the house and was talking. When Jesus is speaking the right choice is to listen, is it not? After he finishes talking he will eat, won't he? When visitors come, it is natural and proper to prepare a meal for them. This is selecting the better portion. If Mary had said to Jesus 'Continue talking,' when Jesus was getting ready to eat, then  we can say that Martha selected the better and  proper portion. To select the proper portion is to remember what you are doing," the priest said, "and to give it your all."

Our columnist was thankful to his friend for the chance to reflect on the story of the two sisters, and what it means in  his life.  When  at study or work and  we think of play and  at play think of work; at a sermon, we pick up the Bulletin to read, or when at the end of Mass, we close our eyes to pray instead of listening to the announcements, we have not chosen the better portion.  We have to be present  to each  moment completely. Only those who are able to see themselves as they are, the columnist says, can give of  themselves undividedly  to what they are doing and choose the better portion.

Living each moment completely is certainly the  way to grow in virtue and maturity. It is not all that easily done for multiple reasons; most importantly because we do not  know ourselves. It would be a good way to atone for the past and prepare for the future.
Posted by Catholic American Eyes in Korea at 12:05 AM