Life Does Not Stop at 60 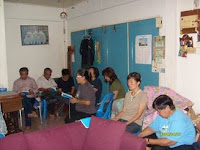 The Church is blessed to have many movements that energize the Church and the Christians. Life Ascending International is one of these movements opened to all Christians. The movement was introduced to Korea in 2003, and recently had a general meeting in Seoul publicized by the Catholic papers. This should help the movement grow. L.A.I Korea, is affiliated with the International Head Quarters in France. A movement to deepen awareness of God, create and enjoy lasting friendships and to share wisdom and concern for others-- Spirituality, Friendship and Mission.

The movement began in France with a group of elderly Christians with the support of the Bishop of Paris and French Catholic Action. After the association moved to Rome it spread to every continent. In 1996 it was recognized by the Church as an international association of the faithful of pontifical right.

The movement sees our lives divided into four stages: first, youthful years from the time you are a child to marriage and work, the second from marriage to retirement, the third from retirement to the time we become dependent on others, and the last stage is dependence on others.

The international spiritual director of the movement talked about Spirituality and happiness at the recent general meeting in Seoul. Old Age is a gift of God; how do I use these years that I have been given in a profitable way? He talked about thinking too much of what ails us, and not enough about what we have and can do.

The members are trying to live a life according to the Gospels. It is called the Ascending life because it is life that is growing, ascending. We continue to grow in the third stage. There is no limit to experience and human maturity. It is not a life ascending to heaven, but rather, life growing here and now towards a human and Christian fullness.

St. Paul in 2nd Corinthians puts it very beautifully when he says: "That is why there is no weakening on our part, and instead, though this outer man of ours may be falling into decay, the inner man is renewed day by day. "