A Hope That Enthusiasm Will Be Contagious 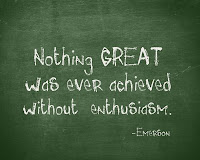 Enthusiasm is a great gift; too little and you have apathy, too much and you have fanaticism. With the right amount all are energized. The Greek word has the meaning of God within-- a person inspired. Enthusiasm has its own attraction, but it also has been a cause of many problems in Church History. As Catholics we are helped to remain within bounds because of the larger community to which we belong. 'In medio stat virtus' ( virtue is in the middle) a Latin phrase which reminds us that its lack and excess are not good.

Enthusiasm under the control of the intellect has done many wonderful things. As a young church Korea continues to show us a mature enthusiasm with movement on all fronts.

At a recent liturgy the celebrant mentioned the number of new seminarians entering this year. Usually we see a great deal of enthusiasm when seminarians come up for ordination. The newly ordained spend 7 to 9 years to prepare for the priesthood and family and acquaintances want to congratulate the ordinands and thank them for the years of preparation. However, the celebrant mentioned in his diocese there were 19 young men who are beginning their first year in the seminary, and on the first day of the new school year, at the Mass with the bishop, there was a full church to pray and encourage these young men who are just beginning, that is enthusiasm. Not likely seen in too many parts of the Catholic World.


This enthusiasm is seen in many endeavors in Korea, and on August 31st to September 5th, Korea will be sponsoring the Asian Lay Catholic Congress. This will be the second congress in Asia since 1994; Cardinal Stanislaw Rylko, President to the Pontifical Council for the Laity,
came to Korea to encourage those who are making the preparations.


There will be 25 countries from Asia that will attend, along with representatives from 200 international lay groups and those from Korea. It will be a very large meeting to discuss: How do we make Jesus known in Asia today ? What do the times tell us? What is the meaning of Asian culture and tradition and what are we called to do?

The Cardinal on his visit said: "The Korean Church, not only in Asia, but to the whole world gives a good example of a dynamic Church, a Church that has cultivated faith and shown a capability in evangelizing that should be a benefit to the other Churches in Asia."

The Korean Church does have an enthusiasm that is conspicuous. They have vocations and continue to increase in numbers. The Catholic Times, this past week, mentioned this meeting and hopes that it will be of help to other countries in Asia. The secret may have nothing to do with methods, procedures or anything that can be conveyed with words, but rather a history that is unique to Korea.