A Good Samaritan in a Buddhist Way 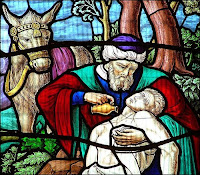 Most of us during life's journey have periods when not all goes well. A columnist in the Catholic Times has entered one of these periods and is working with a remedy that she remembers from a Buddhist story.

A person who was adrift and with no possessions went to see Sakyamuni. He was told to follow the 7 ways of giving and when they became a part of his life, things would change.

The columnist had no problem with the first six but with the seventh she had no confidence. It was difficult for her to ask a person what he or she wanted and doing it. And to go a bit further and anticipate the needs of another was just too much for her to manage.

She goes on to mention that the husband, if he had been sensitive to her feelings, should have said that she should decide when to keep herself veiled or unveiled. She should have the freedom to take account of the place and time and do what she felt comfortable doing. By behaving in this way, the husband and the wife would be anticipating each other's needs.

The column concludes by describing an incident that began when she received a phone call from a friend who had a problem she wanted to discuss. Having a great many things to do, she found the interruption annoying, but made plans anyway to meet her and provide some help she had arranged. The friend, in turn and completely unexpectedly, also gave her material that she later found useful in doing her work. Here was an experience in which both easily fulfilled the last and seemingly most difficult of the 7 ways of giving--they both anticipated each other's needs. Shangri-La is not always that far away or difficult to find.