Father And Son In The New Korea 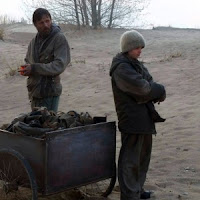 The mother of Mencius, an interpreter of Confucius, moved three times to help her child. They lived, first, near a cemetery where the son began imitating the mourners; then they moved near a market where he was influenced by the ways of the market, and, finally, they moved near a school where Mencius started his journey in scholarship.
Even today, parents will do anything to get a good education for their children. A good education is thought to be the road to happiness. The young are no longer protected by family from being influenced by what is going on in the outside world, so the problems are quite different from the past.

A priest, writing for the Pastoral Diary column in the Peace Weekly, tells us of two incidents that are frequent in the Korea of today.

One evening, late at night, a teacher from the Sunday catechetical program came to see the priest, with a first-year high school boy, guitar in hand. The teacher explained that the boy was thrown out of the house because he wanted to study music and his father wanted him to go to college. That evening the boy had no place to go and the teacher had no room in his house for the boy, so he came to the priest for help. The priest called around to find a place for the teenager. He had the teacher call the mother to tell her not to worry; they had found a place for the son to sleep.

In this case, there is a young man in love with music. In the old days, music was not considered an occupation parents would consider for their children. This has changed but there are parents who haven't. The father wants the boy to go to college; the boy is interested only in music. So who gets his way?

In the other case, a boy has a temper tantrum, causing a serious commotion in his classroom. The priest spent hours with the young man, with the boy ending up crying. It was a problem again with the father, and in frustration the son took it out on others.

The priest concludes that fathers have to listen more compassionately to their children. It has not been the Korean way, but times have changed and fathers have to change as well.

Dialogue is still not something parents find easy to do in the home. The relationship of husband and wife is stronger than the relationship of father and son in the Korea of today. Still the pain that an older son can inflict is felt as in the old Korea. In the cases referred to, the boys want to do something the fathers consider unacceptable. Dialogue has to begin, with fathers seeing other possibilities than those they originally preferred.