Giving Is Not Always Easy 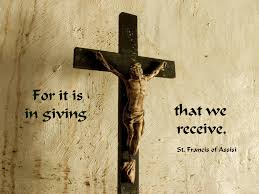 Moving is difficult and requires thought. When it is a question of not only moving but having to rebuild, trying to decide what to keep and what to give away is not only difficult but dangerous.

A priest given the job of rebuilding an old church structure near collapse was faced with these problems, and shares them with the readers of the Peace Weekly. What was he to do with the fixtures and furnishings in the old building? What should be kept? What can be given to others? What can be disposed of? He found them to be difficult questions to answer.

Many gifts were given to the parish over the years. Talking to the older priests, he found that the consensus was to ask those who gave the gifts what they would like to do. What to do with the altar turned out to be the biggest hurdle, even though the gift-giver, who had left for Spain, wanted it given to another church that was being built. However, this did not stop the uproar among the Christians:  "That is a very expensive altar and you are going to give it away?" "What is the reason for being so quick to dispose of the altar?" "Can't we use it in the new church?"

The disturbance was so great that he decided to postpone the decision on what to do. He found this difficult to adjust to, and wondered about his preaching, how effective had he been in preaching on the importance of letting go of what we have. When we grasp too tightly, God finds it difficult to give something new.

When all was placed in storage he was relieved. But there were articles that would rust and not be usable, and he wondered why it was so difficult to give them away. The storage fee also was a little extra hurt. Disposal has some negative connotations but when something can be used by another more profitably, he asked himself, isn't that sharing? For us as Christians, 'mine' and 'yours,' are not words that we easily say, for it is all belongs to God, given to us for a time. When I can't use something I should give it to another. Why don't the  parishioners want to  give? These are the musings of the writer.

Obviously, there are things we should preserve or use again, but putting all the fixtures and furnishings in storage gave the pastor much to ponder. It was not easy to fine-tune his feelings with those of the parishioners. He wonders what other problems he will face in the years ahead.
Posted by Catholic American Eyes in Korea at 12:05 AM