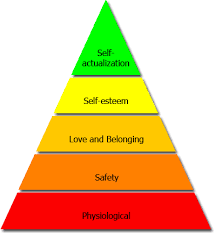 On the opinion page of the Catholic Times, the columnist brings up Abraham Maslow, the psychologist who made us aware of what he called the hierarchy of needs. The title of his opinion piece is "For what does one live?"

The first need, according to Maslow's hierarchy of needs, is for physiological, biological fulfillment: food, clothing, shelter and sex. Food is not everything, but without it nothing else matters.
The second need is safety. When the physiological needs are filled, we then look for security. But this  also is not enough and there is a search for love and belonging. Since this also  does not fully satisfy there is the search for esteem or self-worth.  Here, we have the desire, according to our columnist, for  recognition, feeling of superiority over others, confidence in  one's capabilities, search for status,  fame, and  the desire for a good reputation, to receive rewards and to control  others.

However, here again a person is not completely satisfied. So we go to the last level, which is self-actualization, which Maslow also called 'growth motivation.' The columnist feels this is where God has an important part to play in the self-actualization process.

This does not mean that each person has to follow these steps to self-actualization. Gandhi, the columnist argues, did not follow the usual steps, as many others did not, but he feels this is not how it's commonly done.

The columnist mentions that he has heard of many who have made a name for themselves in life, but when death comes they look back and wonder what they did with their life that could have been done better,expressing remorse for not having lived a more fulfilling life.The desire later in life for self-examination  often leaves many with a feeling of dissatisfaction. But many reach the 4th level of needs and rest there, content to enjoy the pleasures of life and indulge one's self-importance.

In the fifth level, self-actualization, the columnist says we should not underestimate the part of religion in reaching this level and going beyond it. It is in the here and now, in the place where we find ourselves, that we realize our ideals. This is not to impress others or be acknowledged by others, but to satisfy our own need for personal growth.
He ends the article with the Genesis story of Joesph and his growth from a selfish young man to a person that could forgive and overcome all he had endured in the past. Helped by the grace of God, he had become a self-actualized human being.
Posted by Catholic American Eyes in Korea at 12:05 AM