One of the Benefits of the Religious Profession in Korea 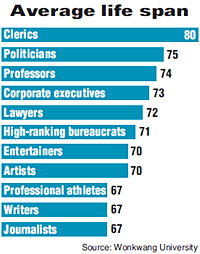 The daily papers recently reported on a study by a  research team from Wonkwang University that  compared the average life span of people from 11 professions. The data shows that those who work in the religious professions have the longest life span, those in the entertainment business the shortest.

Based on data from the office of Korean Statistics and on obituaries for the past ten years, the study shows that clergy, professors and politicians are more likely to enjoy longer lives, while journalists, athletes and entertainers tend to live shorter ones, clergy, on average, living 82 years, professors and politicians,79; journalists,72;  athletes, 69; and entertainers, 65.

The research team suggested that the longevity of clergy results from a temperate lifestyle. However, due to the widespread interest today in staying healthy, there's less of a gap in life span among the various professions in this 10-year study than in a similar study with data compiled from 1963 to 2010. Clergy is still at the top of the list with an average life span of 80 years, followed by politicians, 75; university professors, 74; business people, 73; legal professionals 72;  high-ranking officials 71; and, at the bottom of the list, entertainers, artists and sport figures at 70 years of age. The only career where the average life expectancy is declining is show business: from a life span of 75 years in the  90s to the current 65 years, partly because of the substantial number of show people who have taken their own life in recent years.

A priest writing for priests quotes a Buddhist monk as saying: "In  Korea those in ministry usually have serious financial problems after they retire. The Catholic priests' financial needs are cared for by the diocese while only about 20 percent of Protestant ministers have guaranteed support.  Buddhist monks also have a similar problem. Depending on how much they have saved, help is provided by the larger temples or by individuals. This is the reason they do not get involved in society after retirement like the Catholic priests."

Catholic priests do have guaranteed financial support from the diocese which does take away much of the stress from their retirement years, unfortunately this is  not always the case in the other professions.
Posted by Catholic American Eyes in Korea at 12:05 AM No comments: Links to this post