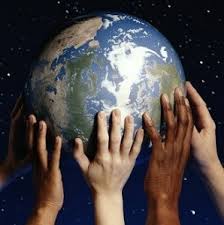 The Peace Weekly recently editorialized on the many environmental problems facing our society. Earth Day, April 22nd, commemorates our newly found ecological consciousness that began, according to the editorial, in 1969 when a devastating oil spill in California contaminated many of the beaches on the West coast. From this incident the grass-root movement took hold and spread to many other countries of the world.

This will be the 40th year since the first Earth Day of 1970 sought to alert the general public of the dangers to the environment. Buying water instead of drinking water from the the tap is now an accepted practice in many societies. And, increasingly, we are eating organic food to avoid the heavily processed foods on market shelves and the pesticide-sprayed and chemically fertilized produce from our farms. Our air is polluted with green-house gases and acid rain, and now the atmosphere has been further polluted with radioactive particles. Even in Korea, schools have recently given time off from classes  because of the fear of radioactive rain.

Humans are the ones that have caused the problem. God put everything in order and determined it to  be good, and told us to preserve and manage it. This has not been something we have done well, destroying much of what was given to us. We as Church should reflect on what we have done as members of the larger community. Do we see only the earth as a place for humans, and consider material progress and financial betterment as the only values of interest? Have we as  Church gone along with this thinking?

Many still see the preserving of our environment  as something foreign to our faith life. Humans appeared late  on the earth but  have destroyed much of what we were given. It is time for us to realize that the preservation of the environment is our work and we have to be active in its fulfillment.

The Catechism of the Catholic Church expresses it clearly (2415):  The seventh commandment (thou shalt not steal) enjoins respect for the integrity of creation. Animals are by nature, like plants and inanimate beings, destined for the common good of past, present, and future humanity. Use of the mineral, vegetable, and animal resources of the earth cannot be divorced from respect for moral imperatives. Man's dominion over inanimate and living beings granted by the Creator is not absolute; it is limited by concern for the quality of life of all, including generations to come. It requires a religious respect for the integrity of creation.