"My Withered Spirit was Fired Up" 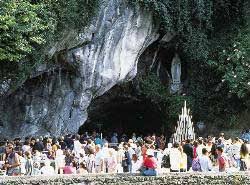 On May 1st I translated the first installment of an article in two parts and did not notice it was going to be continued. This continues the story of the priest who went to Lourdes on a pilgrimage.("Before Asking for a Miracle, First 'Believe'")
That night the priest returned to the shrine where he spent a great deal of time in prayer and meditation, after which he returned to his lodging. Next morning he got up early, said Mass with the sisters, and after breakfast hobbled over to the shrine. Saying the rosary, he waited for the submerging ceremony.

After undressing and putting on a gown, he was led to the stone tub to be submerged. All he  could think of was how cold the  water was. That was his only thought.
At the end of the ceremony he remembered he did not thank God for the expected cure. With all kinds of thoughts running through his head, he decided to leave everything in the hands of the Blessed Mother and returned to his lodging.

After eating lunch at the convent and still hobbling, he was taken by the sisters to the railroad station in Lourdes. On the train, his knee hurt as before but his body and spirit were refreshed.

When he arrived in Lourdes the desire for a miracle was urgent but after one night and two days in Lourdes, he felt like an innocent child, able to pray with a purity which gave him much joy. After a tiring two days, he easily fell asleep on the train, and was just 30 minutes from Paris when he awoke.  He stretched, picked up his luggage and, as he got ready to leave, was surprised to find that he could walk without a limp.

"Why," he asked, "am I  no longer limping? My knee gave me a great deal of trouble and now the pain has disappeared" He did a little running in place and it hurt a little. When he arrived at the place of lodging, the knee no longer hurt. "Was that a miracle cure?" he wondered.

The writer, after listening to the priest's  movie-like story, told him: "You  have been blessed with a miracle!" The priest answered: "In fact, more than the healing of my knee, I was able to pray with a pure heart. My withered spirit was fired up. That is the real miracle."
Posted by Catholic American Eyes in Korea at 12:05 AM No comments: Links to this post