"Driven to Kill Oneself" 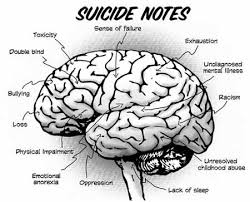 The guest column in the Catholic Times revisits the problem of suicides in one of our elite schools of learning, causing many to question whether the teaching atmosphere at the school inadvertently leads students to take their own life.

The writer mentions several possibilities that have been suggested by many: the teaching methods, the stress on getting good grades, the way of determining tuition, the teaching in English. How are we as Catholics to see the situation? What should be our response?

For us, it is self-evident that life is precious and should be seen as such. The Church has always looked upon taking  one's life as immoral. God has given us the gift of life, and we should not  violate what we have been given. Life and death are under God's control. Suicide is going against the instinct we have to preserve our life, and also against the love we should have for ourselves.

There is also something else we have to consider. We can readily understand that suicide is an individual act, an act  that results from personal dispositions and reasons, but it's also influenced by the society we live in. A document from a  meeting last year in Japan on suicide concluded that using the word 'suicide' to describe the killing leaves the impression that those who kill themselves are to be blamed. The document suggested replacing the word with the phrase 'those who are driven to kill themselves'. The word used in Korean also should have less of a feeling of finding fault.

Many who have made a study of this subject agree that it is  primarily a feeling of helplessness that takes over, which often happens when we are not able to compete successfully with others. Communicating with others then becomes difficult and the person with the helpless feeling is left to deal with the feeling alone. They are not desiring to die, says the writer; within the distorted thoughts of death is still a desire to live--if only....

The competition that is especially hurtful is the kind that encourages us to win at any cost, the kind that turns others into tools to be used for our success. In contrast to the often ruthless competition of the marketplace is the competition in good faith, which helps personal development and brings about progress.

The proposed reasons why the students and the teacher took their lives should cause us to reflect on the kind of society we are building. Changing our thinking from "making it alone" to relating more with others should guide our actions. We need each other to become what God intended. The law of the jungle, where the weak are exploited by the strong, should have no place in our society.
Posted by Catholic American Eyes in Korea at 12:05 AM No comments: Links to this post