Toasting to Success With Poison 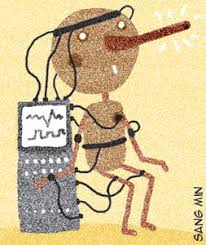 The Desk Columnist of the Catholic Times rarely has time for TV dramas but did see enough of the popular drama "Miss Ripley," which is now being viewed in Korea, to share his thoughts with his readers. The theme is taken from a 1960 French Film "Plein Soleil" (Full Sun) and also on events in recent Korean history.  The film focuses on the protagonist's pursuit of his dream world  until it all  comes crashing down.

The drama takes place in the  world of hotels, where one can find extraordinary success and failure, greed and love, all making for griping melodrama. Our heroine is the girl next door--no money, no school credentials nor any luck. So when something unfortunate comes her way all she can  do is run away or suffer outrage;  she has no recourse to society.

Without thought and unexpectedly she lied and lo and behold up until then no matter how hard she worked she was a nobody, but with the lie all the doors opened.

Laughable as it is and contrary to all the teaching of our popular moral codes, everything works out well. In this scenario, the ones who are deceived are the fools and the ones deceiving are the laughing victors.

Why is this  drama so popular in our society? He answers that it could be that society is familiar with the many irregularities of our mendacious society and waits for it all to fall apart. However, at the same time, our uncaring society helps to  foster this mendaciousness, knowing that material success is often achieved by the help of lies--a wonderful tool for the unscrupulous.

The drama is based on the French film in which a poor young man named Ripley kills his rich friend and replaces him in society with all the perks that  come with being someone who is rich. The film, based on a book, gave birth to the "Ripley Syndrome." The columnist explains that it is an attempt to make what you want the world to be, the world in which you live. You deny reality  and with your lies make that your  reality-- a pathological condition.

The columnist concludes that not only in society but in the church we have many Mr. and Miss Ripleys.  Why should this be so? The answer is simple. Those who are able to see and judge with the sensitivity of Jesus are few. The  Ripleys  of the world are making  a world  of sweetness with their lies and  are celebrating their success with a toast of poison.
Posted by Catholic American Eyes in Korea at 12:05 AM No comments: