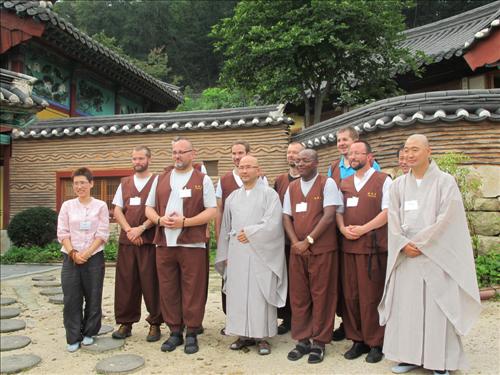 Korean media found  it worthwhile  to  publicize  the visit of eight young German Benedictine monks who have come to Korea for a 40-day exposure to Korean culture.They are also interested in seeing their elder Benedictine monks, as they pursue their work in and around the Waegwan monastery, to gain a deeper appreciation  of their own mission call.

They are living at the Benedictine monastery, where they are learning about the culture of the country, hearing lectures on the language, politics, finances, and  the history of Catholicism in Korea. They will visit the many works that have been undertaken by the Benedictines over the years--and it has been many years. The Benedictines, the first male religious order to settle in Korea, arrived in the country more than 100 years ago.

During 3 days of this month, the young monks spent time in a Buddhist monastery to experience  the life of Buddhist monks.  To help them to know themselves better, the chief monk, on the first day of their temple-stay, gave them a question they were to reflect on while at the temple. His question:  "How many points do you have to have to enter heaven? Is it 100? 70? 50? And who gives the points?" The Benedictines thought it was an interesting question to ponder.

In silence, they went mountain-climbing, listening to voices from the heart. Like the Buddhists, one of the Benedictines said Catholics also respect all of life, and that doing the bows was a way to appreciate the others religion. When eating, they knew that they were to take only what they could eat, not leaving any food on the plate. The temple-stay was a helpful time for the Benedictines, and one monk said the experience helped him in his own prayer life.

The temple-stay program, which the government inaugurated and helped finance, enabled foreigners, as well as interested Koreans, to learn something of the traditional culture of the country. However, at the end of last year the government cut  some of the funds for the program, causing friction with the government. The president, a devout Presbyterian, is seen by Buddhists as not being friendly to their interests: at the beginning of the year, all members of the government's ruling party were banned from attending  Buddhist events. But this situation has changed. The government has reinstated the funds to their former level, and after some misgivings the  Buddhists have extended their hand in peace, and the government has reciprocated.

Catholic monks making a temple-stay should be a sign to  Koreans that the Church desires to see harmony between all segments of society, especially when it occurs between religions;  their efforts to understand and to dialogue with each other sends a message that speaks loud and clear to all of us.  It could also be a sign of what will be required to ameliorate the situation between the North and the South.
Posted by Catholic American Eyes in Korea at 12:05 AM No comments: