Responses to Absurdities of Life 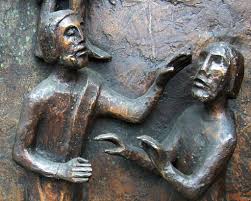 'Absurdity' in life affects us all in different ways. In a Korean daily a columnist explores how absurdity has affected a number of novelists. A foreign novelist, seeing the absurdities of life, has one of his heroes who is condemned to death lash out at a priest who is trying to console him. In another novel, the hero, seeing a young child with a contagious disease, angrily says to a priest: "That child has no sin and yet he is dying. There is no God."

The columnist says that modern novelists are hesitant to bring God directly into their writing but their fictional characters often allude to the 'disappearance' of God in life. He mentions three Korean novelists that have found their way to God. One of them, who died last year,  wrote essays on religion for the Catholic Seoul Bulletin.

"When my mother-in-law died," she once wrote," and was entrusted to the undertaker for making the funeral preparations, I was overcome by a feeling of grotesqueness. After death I didn't want that to happen to me and went on my knees to God." She became a Catholic in 1985 at the age of 54. She is also quoted as saying: "Lord, I have been told that if I want to be a light I have to be consumed. I will courteously refuse. I will be like a sunflower that moves in your light."


Another novelist, who is fighting cancer, is also serialized in the Seoul Catholic Bulletin. His battle with sickness has enabled him to see life in a different light. He had no joy and fear overcame him. But Jesus' words in the garden of Gethsemane helped, "My heart is nearly broken with sorrow. Remain here and stay awake with me."

Fighting the cancer he expresses his fear, " More than the pain is the unending  worry and fear. 24 hours a day every moment is filled with pain." He realized that uneasiness and fear comes from thoughts of the past or the future, and brings to mind the words from Buddhism: "The mind of the past is not available, the present mind can't be possessed and the future mind can't be acquired."


The novelist in his sickness met God's star. "God leads us to the precipice where we realize we have the wings of an  angel," he wrote.  He was able to overcome the pain of the chemotherapy. "This body," he continued, "is taffy in the hands of you, Lord, the taffy maker. Do what you want." Kneeling before God is not surrender but courage. This obedience shows us another side of the novelist's courage.

In conclusion he quotes the line from Matt. 6:34: "Enough, then, of worrying about tomorrow. Let tomorrow take care of itself. Today has trouble enough of its own."
Posted by Catholic American Eyes in Korea at 12:05 AM