Helping Others to Grow Old Gracefully 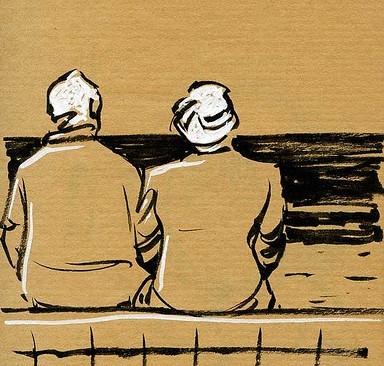 In his Sunday chat column, the Catholic Times' writer recounts how his mother at the age of 70, after the death of his father, was baptized. They lived in a small village on the outskirts of Seoul. Together with the neighboring women, she was happy doing volunteer work for the church. One day, desiring something more important to do, she asked if she could become a member of the Legion of Mary. She was turned down.

Her son doesn't know for sure, but suspects his mother was deeply saddened when she was not accepted. But she soon became active in the Purgatorial Society. It was at that time that they moved from their village and circumstances changed. The women were extremely kind to the mother. When the bus going to the cemetery had many who were going, she was kindly told she need not go.  When she heard there was a need for someone to clean the toilets at the church, she happily prepared all that was necessary. But when she went to the church, she was told: "Granny  there is no need for you to work, go home and rest,"  Disheartened, she returned home.

On reaching her 80th year, she lamented that "Others can work as volunteers, but they want me to stay home and do the house work." At ninety, she works around the house  after hurting her back, she is not able to stand up, but crawls around the house, cleaning and doing her work.

To make his mother happy, the writer became a member of the Legion of Mary.  On the  day of the Legion meeting, if he complains about having to attend, his mother is always ready with her unfailing question: "Aren't you going to the meeting?" The mother's devotion has been a great assist in his own spiritual life, he says.

Age in Korea is an issue that will not disappear easily. Workers are asked to retire at an early age. Respect for the elderly is an important part of  the culture, but at the same time the aging process is quickened by the hands-off policy of parents who turn everything over to the children.  How many grow old gracefully and find great joy in old age even when they enjoy fairly good health?  It is not a difficult question to answer. The elderly are put on a pedestal, respected and loved, but not always seen as a person having an important place in society.  When one feels of little use, something happens, to that person's morale.
Posted by Catholic American Eyes in Korea at 12:00 AM