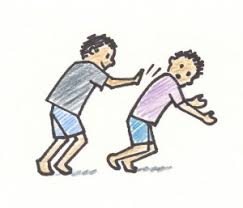 Bullying is a topic that continues to get a great deal of attention in the press. Middle and high schools have been the focus. The public became concerned because of the violence, harassment, and suicides.

The problems are not limited to the individuals involved but now includes the whole of society. There are a number of evaluations and prescription for a cure and they deal with coming to grips with problems in the family and society.

The Catholic papers had an interviews with the principal of a Catholic high school in Incheon. He begins by saying, "As a forest gives off a special aroma so also does the St. Andrew Kim high school give off God's aroma: there are no bullying incidents at the school." This was the principal's answer to the question about whether there was bullying at the school.

The principal, when asked about the events in society that have prompted many to poke at the 'hornet's nest', said he found it very depressing. The reason for this, he feels, is that in the past parents educated from their innate sense of what was necessary but today it's being done differently because of the global competition winning is everything.

Education begins in the family, he noted, and than expands to the schools where you can find reasons for violence. The students themselves who are requesting education have within them the seeds of violence.  At the school we consider all the students as our brothers and our children. We have over seventy teachers on the staff, 90 percent of them Catholic, so we are able to function with the Catholic idea of education.  Physical punishment is strictly forbidden but necessary discipline is permitted.

One of the Catholic educators said: "In Catholic schools, students should be given Jesus' value system and helped to live according to these values."

The principal concludes that the foundation of education should be our common humanity and that schools should be able with favorable surroundings to develop the students' strong points. He stresses that religion is like the stomach of a person. If this is sick the whole person is uncomfortable. If religion does not do what it is meant to do in a school setting, violence in some form, he believes, will not be absent.
Posted by Catholic American Eyes in Korea at 12:05 AM No comments: