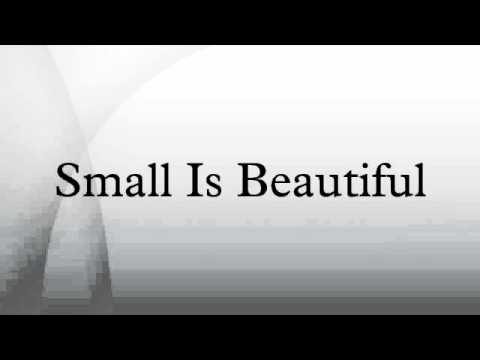 A college professor in a Peace Weekly article reminds us that 'Small is Beautiful'. He tells the readers his business card contains a few things besides his name, job and contacting information. On the back of the card, he has the cover pictures of two books he has published on city planning and design— good publicity. When they take the card without looking at the backside he is sad.

Also, he has five Chinese characters on the back. He made his own slogan to fit our Korean reality using the phrase 'Small is Beautiful'. His five words together mean: 'Many small things together give strength and beauty'. He refers to the book written by Ernst Friedrich Schumacher (1911-1977): Small is Beautiful: a study of economics as if people mattered. A book very popular around the world at that time.

To have a decent gentle city that the citizens want, we need to see the city with new eyes. Citizens are the owners of the city; what we have is not given by fate but can change according to the wishes and courage of the inhabitants. The strength of each citizen is small but when they work together as masters by words and deeds strength increases.

Being the author of two books on cities he is invited to give lectures. At the end of the lectures he introduces his five-word slogan:'Many small things together give strength and beauty'.

We can divide the world's economy into two, one is a dinosaur-like economy and the other is a rabbit-like economy. If we inadvertently consume the products of large corporations and multinational giants, do you think the size of the dinosaurs will shrink? If we don't help the rabbit economies, such as village businesses, social enterprises, and cooperatives, will the rabbit economies survive among dinosaurs?

How can we make a beautiful world, a world where the strong and the weak live together; a world good in God's eyes? The professor finds the answer in small is beautiful. I believe that if many small entities are in solidarity with each other and strengthened, they can be reborn as strong and beautiful new realities.

Even if half of the population in Seoul and the metropolitan area is lost, smaller cities will benefit and need to think about how to work together with the other cities in building good public transportation and in other areas to benefit the citizens.

Grains of sand separately are weak, but when united tightly together, they are no longer weak. Smallness working together can become strong and beautiful.
Posted by Catholic American Eyes in Korea at 12:00 AM