Do not stop, move forward. Do not be afraid. " 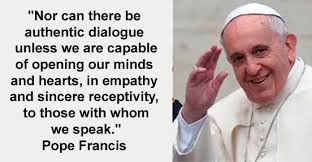 A committee member of a unification research team in the Diagnosis of Current Affairs column of the Catholic Peace Weekly gives us three words to spend some time on: Dialogue— Peace —Change.

# 1 Dialogue: A Singaporean scholar mentions the gift given for the Korean peninsula on June 12, with the North Korean and  American Summit. It was on that date in Singapore that Kim Jong-un and the Trump Summit was held. On the memorial stamp for the occasion the word "Sentosa," was written in the Malay language, which means peace and tranquility. The  Singaporeans, felt pride that they played a role as peace mediators. For Singaporeans, the conversation singled peace.

# 2 Peace: On the Korean peninsula, peace cannot be guaranteed by dialogue alone. From spring to autumn in 2018, seven historic summits were held on the Korean peninsula, which shook the terrain, all talked about peace.
However, residents of North and South Korea are still hesitating at the entrance to peace. Where we stand in the year 2019 is not the place of stable peace but on the  border of an uneasy peace.
Stable peace can only be achieved if no consideration is given to the use of force as a means of resolving conflicts. There are two ways to do this. The first is a political commitment to the abandonment of military use through peace treaties. The second is to bring about 100 American businesses to North Korea  and 100 businesses from North Korea to Washington. Then common sense tells us that conflict brings about self-destruction. Both journeys to stable peace require fundamental changes in the thinking, awareness, and behavior of the leaders of the three countries.

There is only one person who knows the mind of Kim Jong-un and that is Kim Jong-un. He is the only person who attended all seven summits of 2018. He would have arranged his thoughts by now.

The United States and China have agreed on a three month truce on the trade war. We are presented with a few months in which Pyongyang and Washington have the opportunity to negotiate. At the beginning of the new year we have this hope and prayer for a stable peace on the Peninsula.
The dialogue efforts that the leaders of the three countries of North Korea, South Korea and America have accomplished in 2018 were working towards peace. Now is the time for the leaders to show change in thoughts, understanding and attitudes. The message that Pope Francis gave to  President Moon Jae-in is hopefully remembered by the leaders: "Do not stop, move forward. Do not be afraid. "
Posted by Catholic American Eyes in Korea at 12:00 AM No comments: Links to this post