More Fearful Than the Virus 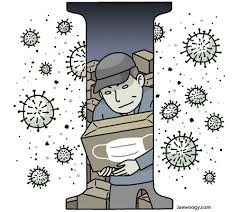 These days, it's difficult to find persons who will sit down with a book related to philosophy. So begins an article in the Catholic Peace Weekly by a research scholar. Is it not because we have entered an era where practicality and efficiency are important? However, this is also an era when people are overcome with work and urgency and need time to reflect on the changes and complexity of life.

"Let’s think about it and live." He believes these words were on a gag program on TV. Words that began with young people but has spread in society. This thinking is criticized for its 'lack of common sense' way of living: referring to a person who acts selfishly and becomes a public nuisance.

The reason he started the article in the way he did were thoughts that came to mind concerning the existentialist philosopher Kierkegaard in his book The Sickness unto Death. For the philosopher two centuries ago the disease leading to death was not a medical disease but the human condition—despair.

We are facing problems beyond medicine and quarantine, fighting the Corona 19 virus, which stirs up, destroys, and threatens the daily life it is also increasing the social and psychological risks and conflicts in society.

There is a view that sees society as an abstract community concept searching for integration, and others who see society as a conflict of interests. The starting point is different, but the integration and conflict we often talk about are not contradictory concepts.

Since society is not a stationary structure, but an ecosystem of dynamic human entities, we must overcome the problem of conflict and at least control it to reach a stable state of integration. Therefore, the task of the Presidential Committee on Social Integration, which has been in each successive government, has always selected issues of conflict and sought ways to resolve them.

Generation gap, gender, region, class, and ideology are called the five major conflicts in Korean society. Now, however, these old challenges are creating a complex situation as they interact with the virus. As biological risks combine with internal interests, conflicts, desires, and collective egoism in human society, social conflicts appear. In addition to the five major conflicts, culture and religion, livelihood, and variables of interest are in the mix.

The chaos brought to our ecosystem because the virus erupts into anger and hatred is as harmful as the pandemic itself. With the prolonged coronavirus outbreak, we have the time to not only combat the virus but to study it as a dangerous mediator of social conflict.

Just as the philosopher Kierkegaard talked about the disease leading to death as despair, what is more, dangerous than the viruses may be our ignorance and prejudice against viruses. We need to break free from ignorance, strengthen empathy between people, restore a healthier community relationship, and strong social solidarity, otherwise, the virus, and our inner faults will bring greater confusion to the world in which we live.
Posted by Catholic American Eyes in Korea at 12:00 AM