Usefulness Is Not the Ultimate Value 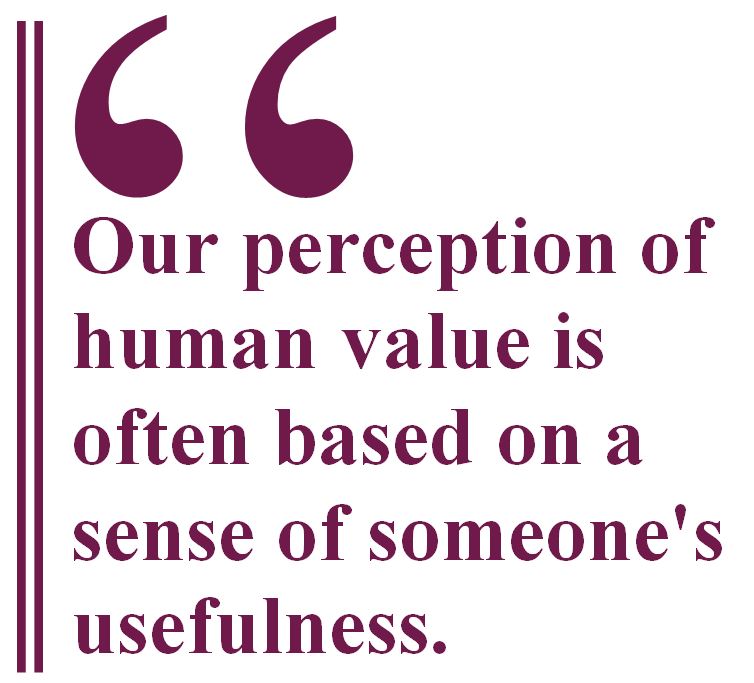 "We need to cut back on the money spent on social welfare! Too many people don't work, they play and eat."

Korea is gradually becoming a communist country: the words of a taxi driver which the author of an article in the Bible & Life magazine, quotes to begin his article. He is the head of the justice and peace work in his diocese.

The taxi driver along with many others equates socialism and social welfare work. Money that is used for welfare is wasted;  social welfare contributes to citizens avoiding work and prepares for socialism. But is that the truth despite the words one hears on SNS and people spread around without thought in society?

One point that people of this opinion have in common is that efforts in this area are useless and those they are supposed to help are the losers in society. When we help those useful for society this is investing but helping these losers is time and money wasted. Everything is seen with the profit or loss lens.

Who are these losers in society? According to the taxi driver, they are those that spend their time playing and eating but it is not only these individuals who don't work but those who can't work for one reason or another. How can one equate those who don't want to work with those who want to work but can't? They look upon these as good for nothing.

Many of us at times had similar thoughts that entered our minds: losers, incompetent, feeble. Judgments that come to us unwanted that belittle and disdain others. On the other hand, when workers are exploited by private industrialists we are not concerned but people that seem to have nothing to do bother us.  We have difficulty when a home for the handicapped is built in a community for the price of property will drop. All that is seen is  the dollar sign.

We all know the parable of the vineyard: Matt, 20:1-16. Jesus likens the kingdom of heaven to the generosity of a landowner who hires laborers at various times during the day and then shockingly pays the last hired with the same wage as the first. They all had a need to feed their families and since they were not able to find work the vineyard owner gave them all the same pay even the ones who worked only one hour for they all had the same need.

Is this not also the lesson of the prodigal son, The son who was always with the father and the son that squandered the inheritance received the same love of the father (Luke 15:11-31).

Why did God choose the Israelite? It wasn't because they were the most diligent of the people at that time but it was God's love that wanted to make them lovable. We are all his loving children and we are called to help all of them to live up to their potential. A rock which is not moved by the wind and rain may have a beautiful flower with its roots protected by the rock which is oblivious to the protection given. We are all important not by what we can do but because of who we are not because we are useful but because we are— is this not the kind of world we want to help build?