Dreaming of Peace Between North and South Korea 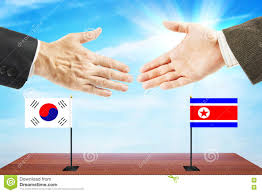 The 4th International Conference on Catholic Northeast Asia Peace Research Institute on the theme of 'Unfinished War' was written up in the Catholic Weekly. Below is a summary of the article.

At the Conference hosted by one of the Dioceses, participants had a comprehensive discussion on the theme: "The Church's Role in Building a Peace System on the Korean Peninsula."

The Korean War remains an unfinished war, 70 years after the outbreak, and the two Koreas are currently the only divided country in the world. There was an in-depth discussion of the causes, measures to overcome the present situation, and the role of the church.

Efforts for conversion and forgiveness: At this point on the 70th anniversary of the outbreak of the Korean War, Christians are left with prayer and conversion.

In his keynote speech, the Bishop of the diocese explained the wounds that the Korean War brought to Korean society and the church and emphasized that conversion and forgiveness are the paths necessary  for healing.

The first thing we must face is the reality of pain. It means that we must know the nature of war, the reality of evil. The hostility between the North and South still plagues us.  Personal and collective experiences such as death and plunder during the war were passed down even to the descendants who did not experience the war directly. Subsequently, the church also confessed that it had experienced severe persecution due to the war and was not free from the antagonism caused by its wounds.

"It is time to develop a Catholic peace movement for Korea." said another participant, that for true reconciliation and peace, we must first go through the process of understanding North Korea. The Korean War does not end simply by declaring an end to the war. To do this, he emphasized it's necessary to clearly understand the cultural and historical characteristics of North Korea and to constantly knock on the door thinking they are partners capable of dialogue and negotiation.

From armistice to peace. At the second meeting, more active measures were sought to move toward a peace regime. To achieve a peace agreement on the Korean Peninsula, all countries related to the Korean War, South Korea, North Korea, the United States, China, and Japan, need to have a common understanding.

A Japanese participant confessed, "I feel a sense of responsibility as a Japanese who was a citizen of a  colonial country." To advance to peace, we must first have a common awareness of war and look at war with a spirit of reflection and apology. He also advised that both South and North Korea must repent, apologize, and pledge not to repeat this again.