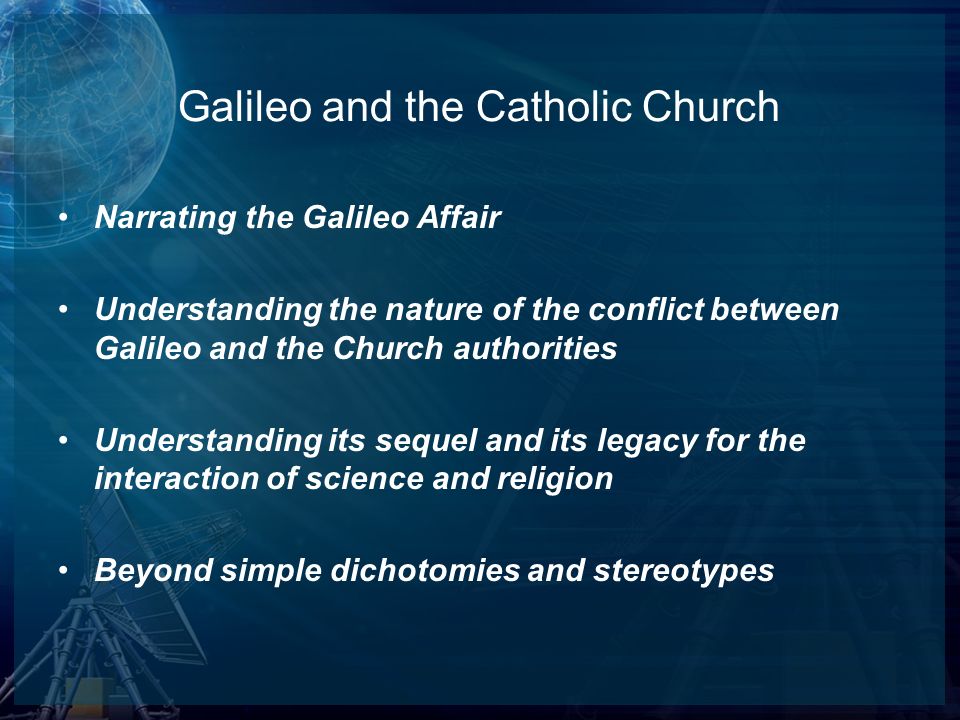 An article in the Kyeongyang magazine by a university priest professor gives the readers some idea of the problems that surround the Galileo affair.

Galileo, a well-known Italian physicist, and astronomer came before the inquisition on two occasions, both in 1616 and 1633. It was not a question about his religious beliefs but on what he discovered by the use of the telescope. What he saw was not according to the teaching of the theologians and was condemned.

This incident with Galileo up until the present time has been the seedbed of conflict between the world of science and the church. He was condemned, it is supposed, for his position that the earth circles the sun and not the sun, the earth. The historians of science continue even today to research what happened at that time.

The writer of the article maintains that it is the conflict between those who hold for scientific realism and those who are anti-realism. The history of the Galileo affair up until the present was simply the story of a scientist who because the church failed to understand his discovery, condemned him with its great power.

But at the beginning of the 20th century, we have the question asked by the philosophers: What is science? These philosophers of science have come to see other aspects of the incident with Galileo that took place some 400 hundred years before. The issue is scientific realism.

There are many scientists and philosophers of science who hold to scientific realism: Science is the position of obtaining facts and truths that exist as independent realities from our awareness and mind. According to scientific realism, the theory not only has empirical validity, such as describing observed facts and predicting new phenomena, but everything the theory says must be literally true even in the unobservable part. Also, the realist would say that science is doing its job to accurately describe these entities. Galileo was a scientific realist and never changed his mind on the heliocentric theory.

We have also the anti-realists who say that the aim of science is not the obtaining of truth but rather by the results of experiment and observation gain useful knowledge to explain the results of experiments. Thus, the real goal of scientific study is not the truthfulness, but empirical relevance. In other words, a scientific theory may be a fictional model that does not intend truth.

Consequently, the anti-realism school is agnostic in the exactness that can be achieved by the scientific method. The scientific method in its observation is a useful tool in helping to achieve predictions of what will transpire. According to anti-realism, the task of science is narrowed down to the pursuit of knowledge that can be verified empirically. Also, theories about unobservable are seen as a hypothesis, a convenient tool for thinking.

Even at the time of Galileo, we had those who were anti-realists: Cardinal Bellarmine and Pope Urban VIII. What is the situation today between the two camps?

The realists support Galileo and criticize the church for knowing little about science and condemning a great scientist. However, we do have the anti-realist philosophers of science such as Paul Feyerabend who surprise many with his words in Against Method.

"In the time of Galileo, the church stuck much more closely to reason than Galileo did himself and is also considered the ethical and social consequences of the Galilean teachings. Its judgment against Galileo was rational and just, and its revision can only be justified in a political opportunist way.

The church was by no means dogmatic. It did not say: what is contrary to the Bible, as we understand it, is false. It did not push aside scientific truths, but they were rather used to review traditional conceptions about the meaning of certain passages from the Bible. For example, there are many passages where the earth is clearly described as flat. Nevertheless, the conception of the sphericity of the earth was an integral part of the Church's teachers from the eleventh century on.

The church, however, wanted precise evidence, not vague assumptions (e.g. poor observations with the telescope). Therefore, Galileo was forbidden in the process to present the Copernican doctrine as truth! But he was allowed to use it as a hypothesis!"

The Galileo Affair continues to be a conflict between the two camps even to this day. It has been subject to distortion and myth and continues to stir intense disagreement among historians, scientists, and philosophers.