Depression, A Serious Problem In Society 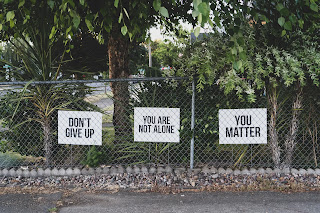 The 'pandemic blues' phrase is mentioned often in the media and society. Korea has done a great job in controlling the spread of the virus and we can thank the citizens in following the the Ministry of Health and Welfare instructions.

Surveys have shown that depression has brought about a rise in the number of  cases of suicide, seen among the young in their 20s and 30s. According to figures for April 2021 released recently, 33% of young people aged 19-29 scored: "at risk" for depression.

Therefore, it is necessary to manage depression through intervention suited to the  characteristics of  gender. Additionally, national-level policies are needed to encourage steps to improve personal lifestyles, including behaviors that will foster health.

The director  of a Psychological Counseling Center writes in a Diocesan Bulletin on depression and areas of concern.

Depression does affect a  person's emotional life but it is much larger in scope. Sadness and anxiety follow along but we have also anger and irritation. The decrease in the ability to concentrate, changes in perception, sleeping problems, lack of energy, appetite, emotional numbness, inappropriate feelings of guilt are also present.

The aspects of depression appear slightly different in men and women. With woman they tend to be critical of themselves, and the greater the depression the more they want to hide from others and the deeper the  depression grows. At times they turn their attention to food and friends. Men on the other hand tend to blame others. They can suddenly get angry, show hostility to others and often turn to sports, drink, or work and  they may end up killing themselves to a greater degree than women.

Those with depression consider themselves valueless. Often others see them as lazy or with a lack of energy and will criticize them. Those with faith are considered to lack it.

The origin of depression is made up of  many different causes and it is not possible to center on one particular one. Our thoughts, emotions, and actions and spirituality are all mixed in and interact with each other. When one sphere changes the other spheres can also change. When the spiritual changes the other areas may also change.

Often we tell those who are depressed: "That's nothing", "change the way you think" and  the like,  flippantly telling the despondent to get over the  problem and change their ways. However Jesus did say in the Sermon on the Mount: Blessed are the sorrowing they shall be consoled (Matt. 5:4).

To those who are suffering from loss of hope and in despair, to feel with them in their ordeal is a great gift. To pray for them is a way of showing concern for them and that they are not alone in their suffering.  More than any word of sympathy or comfort to show oneness with them is a great comfort. And gives hope that we will all welcome tomorrow's sun with the Lord.