In Essentials Unity, in Non-essentials Liberty in All Things Charity 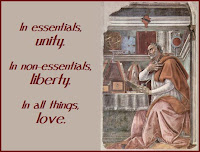 "In essentials unity, in non-essentials liberty; in all things charity." A familiar expression especially relevant today, when differences of opinion, both within society and the Church, seem to be the rule rather than the exception. The Korean Church is also well aware, and has been for some time, of the divisions within the Church, and has sought to overcome them by stressing the importance of working for unity at all times. The problem is that what some think essential is considered non-essential by others. And what some think non-essential, others consider essential.  The editorial in the Catholic Times addresses this issue for the readers.

Benedict in his last sermon as Pope said, “Show the face of the Church and how that face is sometimes disfigured. I am thinking particularly about sins against the unity of the Church, about divisions in the body of the Church. Overcoming individualism and rivalry is a humbling sign.”

The editorial also mentions the breakdown of negotiations in the parliamentary probe of the National Intelligence Service (NIS) that were investigating allegations that the NIS interfered in last December’s presidential elections. Many in society see the interference as an illegal maneuver by the government agency, and want this acknowledged, while the government wants to ignore the issue.

Recently, the NIS has uncovered a plot by members of Congress who have purportedly aligned themselves with the North against the South. The news media in the South does not make it easy to learn the facts of issues facing the country, but in this instance it diverted attention away from the issue of interference with the elections last year and the reasons for the public's opposition to the NIS.

The editorial attempts to show that in times such as ours, when government cannot be trusted to always act for the benefit of its people, the Church has good reasons to become involved in society, and not silently and uncritically repeat the mantra of Church and State separation. It does require prudence, but when we see amorality within government, there is a need to expose it. Popes have given us examples in recent history, and now Pope Francis is showing us the present need of helping the poor by getting more involved in society.

The editorial ends with a plea for better and more frequent dialogue between the contenting factions within the Church. The unity of the Church and Christian fellowship demands that we work toward more fruitful debate, it emphasized, for continuing health of the Church, and added that this can be best achieved if more Christians were to take a more active role in learning what issues are currently being debated.