It has been a mystery to me over the years to see the number of newspapers in Seoul-they seem to have a large readership and no talk of bankruptcy and problems with income. This could be my simple lack of information on the subject.

The president of the Peace Catholic Newspaper and Peace Broadcasting System in the“editorial” for the 21st anniversary of the Peace Newspaper had a rather gloomy assessment of the situation. In my own way below is a brief summary of what was said.

The media is a means and not an end. No matter what means are selected the end is the same, to live like human beings. How to live like a human being is different for all of us but there is a general consensus on what is meant to live a human life. Each one in his or her own way has to determine the general values of living a full human life. In a contest if there is no points given then you have no losers.

He listed what Gandhi said about the destruction of Nations:

1) politics without principles
2) business without morality
3) wealth without work
4) knowledge without character
5) science without humanity
6) pleasure without conscience
7) worship without sacrifice.

The president left us with the impression that no matter how hard the financial situation becomes he will not resort to anything that does not help us live a more fully human life.

This is an issue that certainly has many different responses. To give the readers what they want is a good way to keep the readership. It is good business policy and many would say common sense. However, success in one field many be a failure in another. I sympathize very much with what the president had to say however, there may me a middle course in how to handle the Catholic news. I do not believe a Catholic Paper should go in the direction of the National Catholic Reporter nor be like the old L'Osservatore Romano. Sandro Magister who knows the situation well said that L'Osservatore has been remodeled: "More interviews. More space given to women. Non-Catholic contributors. International news, and about the Churches and the religions. Major cultural topics. To prompt thought and discussion even outside of Catholic boundaries."

There has to be honesty in the media but not everything has to be said because it is out there being talked about. The change in the L'Osservatore Romano would be a good example for many of our Catholic papers. The editorial ended with a quote from Isaiah:

Lo, I am about to create new heavens and a new earth;
The things of the past shall not be remembered or come to mind.
Instead, there shall always be rejoicing and happiness in what
I create. Isaiah: 65:17-18
Posted by Catholic American Eyes in Korea at 5:17 PM No comments: Links to this post

Korean Weddings Need not be Expensive 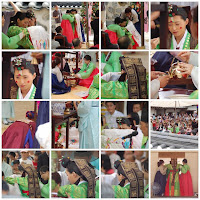 May is the peak wedding season in and even though the times are difficult many Koreans opt for expensive weddings. The government during the non democratic days tried hard to change the habits derived from the culture but with little results.

In recent days there have been articles in the daily papers showing how expensive some of the weddings are but also those who make it a point of having a very simple wedding. If they choose to have a wedding in a first class hotel the weddings can cost 100 million won. This would include flowers, makeup, photographs, gift for the in-laws music and the wedding banquet. For many who are not that well off, the cash gifts from the guests which can range from 20,000 to 100,000 won will help pay for the expenses.

In as elsewhere there is not any hard and fast rule that you can lay down and say this is the way it is done. The Culture for the most part influences the wealthy more than the middle and working class but the facts are that there are as many different ways of marrying as there are couples and this is truer today than in the past. There was a time when it was said that the groom’s families asks for three keys from the brides family: a key to a security box, car and house. These are the types of stories that make the papers. Those who are not wealthy have more freedom to do as they please while the wealthy may be more concerned about what others will think and what their social peers expect of them.

Just recently we had the wedding in the States of U.N. Secretary General Ban Ki-moon’s son. It took place in a small Catholic chapel ( ) in where 150 well wishes attended even though he only invited 100 of close family and friends. Cash gifts were declined. There was no rent for the wedding hall, no flower garlands, no red carpets- a Church Mass and the exchanging of vows before the priest. Ban’s two daughters also had very simple weddings by Korean standards.

A Catholic Church wedding can cost very little. In many cases it is the Mass stipend if there is to be a Mass . The rest will depend on how much the family wants to spend for photographs, clothes and banquet. This can be done with very little if the customs of the area do not make it difficult for the couple to do what they feel is appropriate.

We need more Koreans who have the place in society that the Secretary General has , who are willing to do what their common sense tells them is the thing to do. With the mass media carrying stories of this type a great deal can be done to change the way people conduct their weddings in our Society

Posted by Catholic American Eyes in Korea at 1:00 AM 10 comments: Links to this post