The use of the computer among the young people here in Korea is
almost 99 percent. The overall percent is 77.1% according to a study
made in 2008. The Holy Father in his address for Ascension Sunday
is urging the young Catholics to get involved and use the new medium
to evangelize. Our fellow blogger from Western Confucian
has the Holy Father giving a blessing to all
of us who are blogging:

I am inviting all those who make use of the new technologies of
communication, especially the young, to utilize them in a positive way
and to realize the great potential of these means to build up bonds of
friendship and solidarity that can contribute to a better world.
Young people in particular, I appeal to you: bear witness to your
faith through the digital world! Employ these new technologies to
make the Gospel known, so that the Good News of God’s infinite
love for all people, will resound in new ways across our increasingly
technological world!

The Catholic paper this week had an editorial about the digital evangelization and its urgency. The bishop's Mass Com committee feels that the Church is not
doing well in this area. Part of the reason is the lack of understanding
of the digital age, the absence of a vision for evangelization and
the inability of us to keep up with the changes that are taking place
in this digital world.

I would like to think that those of us who have a Catholic blog are doing
something to build up the Kingdom. The editorial ends by saying that if we
are at peace with things as they are than the territory in which the Lord
will have an influence will decrease. Amen
Posted by Catholic American Eyes in Korea at 4:39 PM No comments:

Sorok Do and Hansen's Disease 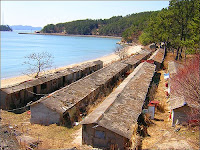 Sorok Do is a little island off the South West coast of Korea. Beginning from 1916, it had been a gruesome island of suffering-where people, as soon as it was known they had Hansen's Disease (Leprosy) their lives were uprooted, and forced to live like animals. As Adults they were sterilized under government law, subject to cruel privations, often sexually abused, even exposed to “experimental” operations.

Now much of this has changed! On May 16th,2009, with the members of our Busan H.D. Community, we traveled four hours by super bus, to Sorok Island, to attend the Annual Government Sponsored Hansen Disease “Recognition” Day. Formerly, access to this island was by ferry, but now we enter by an impressive bridge and new roads.

Although it was pouring rain throughout the day, about 3000 H.D. folk from all over Korea attended- this included the Korean Prime Minister, Me Han Seung Soo, the governor, mayor and many other high officials, many of whom were given ”thank you scrolls and plaques.

Perhaps it' s my nearsightedness, but it now looks like it is politically advantageous to help and be associated with the H.D. work-judging by the smiling officials making themselves visible before the K.B.S. TV cameras, the glad handshaking, name-card giving, and ready apologies.

As we turned away from all the politicians together with the now pretty wet H.D. on lookers, I asked my H.D. companion, “So what do you think of all this?” Smiling faintly he replied, “ A nice show!”

Mr. Yong Mo recounted how 40 years ago he escaped from Sorok Do at midnight, was pursued by police and hunted for 20 years before his human dignity and right to family were finally recognized!
Posted by Catholic American Eyes in Korea at 6:40 AM No comments: